Have you ever noticed that most piano players have short nails? Shorter nails help pianists play quicker and with more technical control. But what if you have longer nails? Is achieving this level of performance still possible? I decided to do some research and here’s what I found.

Yes, you can play the piano with long nails, but playing becomes more difficult. Long nails can cause a knocking noise on the keys and force you to play with straight fingers. This will limit overall hand movement and the ability to play piano expressively. It is advised to cut your nails shorter to play the piano effectively.

Although long nails make piano playing tougher, there are some ways to work around it. I decided to research and share a few tips with you to help you get the most out of your playing if you want to maintain your long nails.

Whether you have naturally grown nails or are using fake nail tips, the overall technique used to play the piano can change drastically.

Here’s what I generally see from people who play with long nails:

Playing with flat or straight fingers can work for certain types of music, especially something lyrical. However, this technique would not work for more finger intensive passages you would find in Haydn or Mozart. Trying to attempt fast sixteenth notes with long nails will almost always result in a muddy, mistake-filled performance. Take a look at the photo below to get an idea of what the hands would have to look like with falt fingers. 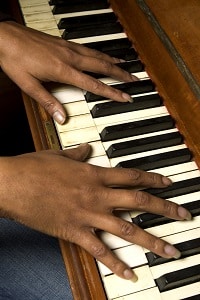 As you can see from the above photo there’s no real way to play much of anything beyond a few chords and slower-moving musical passages.

Because of the length of the nail, the pad of the finger has a hard time actually connecting with the key. Because the nail itself has no weight given to it, it can’t drive down the key on its own.

This is why one of the biggest problems you’ll hear out of pianists with long nails is a quality sound. The sound they play with is often lacking any real depth even with flat fingers. Sound quality is one of the most important factors in piano playing, so not having this because of long nails is really limiting the experience for the audience and performer.

Another common issue I find with pianists who play with long nails is that their playing speed is greatly reduced. Longer nails can cause the playing to come across as frantic and bulky. Nails that are wide can especially take up a lot of room between the fingers, causing them to collide and make extra noises.

The performance is now full of stumbles, misjudged leaps and everything else because the pianist is overcompensating for their long nails. Some music is meant to be enjoyed at a quicker tempo, and long nails don’t contribute to that effort at all.

The shape of the nail is one of the biggest factors. We all have different hand sizes and lengths. The way long nails might affect my fingers might not be the same for the next person. Because every hand size is different, the way we set our hands at the piano varies. If you have long nails, there is even more work that has to be put in to adjust the hands.

So as a result, the overall technique of the pianist has to adjust strictly to flat finger playing, or it will collapse.

Lastly, long nails can lead to injuries. Just imagine playing a difficult passage in your music, but completely flat fingered. it’s going to be hard to keep up with it and you might accidentally get those long nail tips caught in between a few keys. At this point, you could end up snagging your nail or chipping it. Not only is that painful, but it can keep you away from the piano a few days.

Short nails work better for the piano. The biggest benefits are below:

Developing a consistent hand position is important at any stage of piano playing. Pianists should be able to raise their hands to the keys and know exactly how far to curve and to feel a solid pad resting on the keyboard. Long nails don’t really make that easy and unless the fingers are flat, it’s impossible to know which keys you’re actually set on.

Shorter nails allow for a better grip and solid foundation for whatever piece you’re going to play. Below is a photo of what a proper hand position can look like with shorter nails. 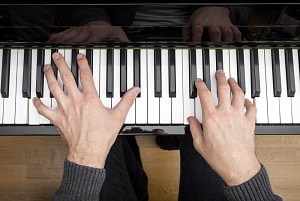 Notice how the bridge is firm, the hands are not overly extended or flat, and that the hands rest towards the back of the keys. In comparison to the photo earlier in the article, this hand position is much better. The ideal resting position for the hands should be a natural curve, kind of like when you’re typing at a computer.

Proper playing technique becomes achievable as a result. Pianists will have a solid foundation of a curved hand with shorter nails. They equally have some flexibility too and can curve more for better articulation, or flatten out for a warmer singing tone.

Long nails on the other hand limit that flexibility and almost confine pianists to one style of playing. In fact, it can make the entire performance very noisy. That’s because of the tips of the nails connecting with the plastic tops of the keys. This sound can make playing less enjoyable for everyone. If the nails are natural, it can also lead to some pain. The shock runs through the entire finger.

Shorter fingernails come in handy because they allow pianists to grip the keys better and produce a rich tone. There’s more control over the sound and achieving dynamics and articulations become much easier to do. Because long fingernails force pianists to play with flat fingers, there’s really only one level of tone quality you can achieve.

Should You Cut Your Nails To Play The Piano

If achieving proper hand position quality sound, and consistent technique is important to your piano playing, then yes you should cut your nails. There really is no reason not to, because long nails will make playing the piano a much more difficult task.

For new pianists, it’s important to build confidence early so you don’t quit. Having long nails can contribute to that and give a false sense of your abilities at the piano.

If you use fake nails, then it’s probably a good idea to remove those entirely.