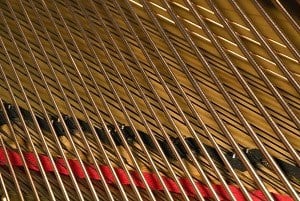 Just imagine playing some of your favorite music at the piano and then hearing loud popping noise. You’re not quite sure what it might be, but a look underneath the lid tells the story. A long metal string is now dangling inside of your instrument, rendering the key useless until its fixed.

Yes, piano strings can break. Defects, wear and tear, and playing the piano too aggressively can all contribute to broken strings.

There are all kinds of reasons why a piano string can break. Understanding how to properly care for your piano is not only smart, but it can save you a ton of money. In this post, I’ll share some tips to help you monitor the health of your piano strings and what to do if it does break.

To help you avoid breaking your piano strings, it’s important to know why they break. Piano strings can break for the following reasons:

Next, let’s look at how each of these can affect a piano in detail.

Age of the piano

The most common reason why piano strings break is due to the age of the piano.  Old pianos beyond 50 years old start to experience failing parts. From rusting of the tuning pins to bearings that are beginning to wear down. If it’s a piano that’s been used regularly, it’s to be expected that something will go wrong with the internal parts eventually.

You often see broken strings occur on pianos in conservatories, churches, and businesses more than at home. The pianos will experience a lot of use from multiple individuals practicing on them throughout the entire day. So naturally, the strings will start to develop some wear in several spots.

Once a piano string breaks on an old piano, you can expect that it will happen to more strings in the near future. Because of that, it’s a good idea to have all of the strings, tuning pins, and bearings replaced at once to ensure it won’t happen again.

While piano strings are known for their ability to withstand even the most aggressive playing, occasionally they can break when this happens too frequently. Piano strings can hold around 150 pounds of tension each, so it takes a great amount of force to break one while you’re playing.

Certain repertoire does call for intense playing, and sometimes that can lead to accidental breakage. If a pianist is used to playing on a 9 foot piano and then takes the same playing technique to an upright piano, then this kind of thing can happen. Different size pianos require different amounts of energy when playing. Some pianos are more limited than others in terms of sound projection.

In addition to aggressive playing, there is also a normal playing of the piano. And yes, piano strings can break this way too. The cause of this is mostly linked to old and worn down strings or defective strings.

Occasionally a piano will have defective strings, especially if its a mass-produced model. Defective strings look to be fine, but further examination shows there are issues with it. The flaw can usually be traced down to the bearing points.

The agraffe, for example, is the brass part at the end of the string which has small holes to guide the strings through. If this part fails, then the string has a chance of breaking. Other parts such as the bridge or becket can cause broken strings too. If the strings are not properly installed on the bridge, then a string can break.

As beautiful as the inside of a piano is, it’s a huge mistake to touch anything in there, especially the strings. Our hands contain oils that can be damaging to the delicate parts inside of the piano. The oils can cause the strings to eventually start developing rust and corrode. The metal would oxidize This leads to a weaker string which will undoubtedly break!

You can learn more about how metal parts can oxidize at this link.

Pianos are very sensitive to sudden changes in temperature. The humidity level of a piano should always be consistent, otherwise, parts inside the instrument can begin to shift out of place and fail.too much humidity will cause the action parts of the piano to swell and the parts will become sticky and function poorly. The strings can actually become rusty and eventually break.

When the relative humidity level is not between 40 – 50 percent the metal strings can begin forming condensation. High relative humidity can lead to the strings tightening and pitch raising. If the humidity is too low, then the pressure against the string is less and the pitch will drop.

While most pianos are thoroughly inspected for quality and performance, some issues can slip through with strings. Occasionally a string may be installed incorrectly, although this is more common during a repair.

How Long Do Piano Strings Last

Restringing a piano is not something that you should do as regular maintenance. Unlike tuning, a restringing is done when the instrument is not functioning correctly. As it turns out, most piano strings can last for several decades. Some pianos have strings in excess of 50 years.

There is a lot that can impact how long piano strings last. Poor care and maintenance will shorten their lifespan.

Because piano strings can last so long, the decision to restring them can be based on the following:

The first indicator that an old piano needs new strings is when the tone begins to sound poor. Pianos in this category have a lack of bass or clarity in the treble. Voicing may help, but it never quite gets to its original tone. If you have a piano that is completely being rebuilt, then a restringing is part of the process. The instrument will effectively become brand new.

How Much Does It Cost To Replace Piano Strings

Much like tuning, replacing piano strings takes a considerable amount of expertise. The average cost to replace a piano string is between $900 – $1200. That is assuming the entire instrument needs to have the strings replaced. During the restringing process,  other parts could also be replaced such as the tuning pins.

To help with continuity and consistency, its helpful to replace all of the strings instead of just one. This makes sense if the piano is very old because the chances of other strings breaking soon after is high.

To replace a single piano string costs between $20 – $30. Bass strings can cost more to replace.

The cost of piano strings varies by brand, size, and material. Complete steel piano string sets can cost between $235 – $400. Because of the length of strings, upright piano strings are usually cheaper than grand piano strings.

Strings can also be sold in individual coils by the pound. Tuners will measure and clip what they need and set the correct tension before wrapping around the tuning pin.

In addition to replacing the string, piano technicians will also have to tune to the instrument. The reason is that an individual string will go out of tune quicker than the other strings. It hasn’t broken in yet, so naturally, that will be the case. What a piano technician will often do is tune the entire piano, or even mute the new strings so that they can gain some stability. A new string will often require multiple tunings.

You can replace a piano string yourself, but restringing is not recommended without experience. There are a number of tools needed to install the strings and measure correctly to the instrument.