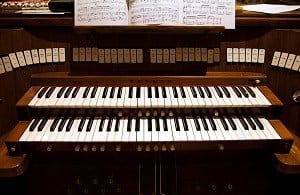 As a pianist myself, it’s always fun to test out my music on different instruments. It’s quite easy to find transcriptions for piano written for guitar, violin, and even wind instruments. But what about the organ?

Now that you know you can play piano music on an organ, we’ll dive in on how to do it the best way. Because there is so much variety in the standard piano repertoire you may need to make some adjustments in order to play that music on an organ. Let’s get into the first point.

Differences And Similarities Between Organ And Piano

There are a few reasons someone might want to play piano music on an organ. For one, the organ is actually a little easier to play. The keys have less weight and so you can play faster and with a  bit more finesse than on a piano. The octave range is smaller so it’s easier to focus all of your attention to a reduced area.

The biggest hurdle with organ playing is having enough notes and getting those notes to sustain (more on this later).

An organ is very similar to a piano with its structural setup. There are black keys and white keys, and each key represents a semitone; so nothing changes there. The biggest difference is in how the instruments produce sound. Pianos rely on hammers and organs rely on pipes or electronic transmission of sound.

Challenges With Playing Piano Music On An Organ

While playing piano music on an organ is a fun endeavor, there can be some challenges. Below is a list of common difficulties an organ player will find when trying to recreate piano music on their instrument:

Let’s briefly dive into each of these challenges so we can learn to deal with them.

Not Having Enough Octaves To Play In

One of the big issues an organ player will run into with piano music is not having enough octaves to play the work. A typical organ only has 61 keys. In contrast to a piano that has 88 keys, this is a major difference.

This presents a few issues for an organ player to solve:

For the most part, an organ player will need to rearrange parts of the piece to fit in another octave. Alternatively, the parts can be split between the top and bottom manuals. Through transposition, the organ can achieve the desired range. Occasionally some music is so involved that a few notes may need to be left out here and there.

One major difference between an organ and piano is the pedal system. This is going to be the case whether the organ is a traditional church instrument or something more modern like a Hammond B3. These pedals are just a bigger version of the keyboard, with notes in the same arrangement and usually no more than a two-octave span. The pitch range is very low

The pedals of the organ allow musicians to add a bit more depth to their playing. When trying to translate music written for the piano into an organ part, you may have the option of placing the lowest notes of the music into the organ pedals. If the left-hand part of the piano were playing a chord, an organist would play the upper notes of the chord and leave the bottom note for the feet.

It’s a cool mechanism to have and adds depth to the playing. The sounds of the pedals are deep and they make the tune sound very full. It is a lot of work though and can be confusing to manage those individual parts all at once. It’s important to mark up the score and know which notes you want to move to the organ pedals.

In organ music, these pedal parts are often transferred over to the left-hand part for the pianist to play. This is because piano pedals work a bit differently. Instead of producing a pitch like an organ, piano pedals simply sustain notes and chain the timbre.

The biggest challenge a pianist or organist will face when switching instruments is the technique. The technique involved with playing the piano is much different than that of an organ. Especially when it comes to articulations, a pianist will find the organ just doesn’t do things the same way.

There is no sustain on an organ, so notes have to be held without the assistance of a sustain pedal. When playing a transcription, it’s important to keep in mind that some notes are going to sound shorter than you’re used to. The whole approach to playing sustain notes, staccato, two-note slurs, and more will have to change.

Organs are easier to play in general. There is not the resistance or hammer action feel that an acoustic piano brings to the table. As a result, pianists are going to find that playing the organ will sometimes feel very fast to them. Likewise, if an organ player were to switch over to a piano, the weight of the keys might pose a challenge to them.

How you manage and adjust the dynamics of piano music is much different on an organ. Organs already don’t have sustain, but do they do have volume control. The volume of an organ is usually controlled by a pedal played with the right foot. The sound can swell, so it’ soften used for crescendo and decrescendo.

This is a huge adjustment for a piano player because those sort of dynamic changes is usually done with the hand themselves. That’s not the case with an organ!

Because of this, a certain repertoire is just not going to work very well when making the transition to the organ. Anything with tons of details and musical markings will need to be combed through and oftentimes changed to fit the instrument. A piano player should not expect their music to sound or feel the exact same on an organ.

Organs have their own unique characteristics, and so the music needs to be adapted to take advantage of the strengths of that instrument.

What About Playing Organ Music On Piano

So, now that you know you can play piano music on an organ, you might be wondering about doing the opposite too.

In the case of playing organ music on the piano, the transition is much easier to make. Yes, you can play organ music on the piano quite easily. What makes it easier to do is that the piano has more octaves, and can capture all the note range composed in organ parts. All of the pedal parts of the organ can be played in octaves in the left hand. Playing those notes in octaves helps reinforce the sound.

There are some challenges as well a pianist may face. For example, if the organ part required both hands to play something while also using the foot pedals, then a pianist has a big decision to make.

Again with any music, it really depends. Even transcriptions of organ music and piano music have slight changes to make the music fit the instrument. Making adjustments to music whenever you switch instruments is going to happen, so be prepared to do this. The great thing about both of these instruments is that because of how they are laid out, it’s really easy to transfer music written for one over to another.