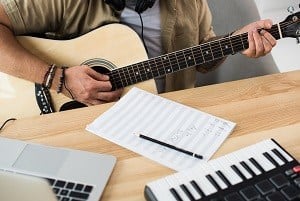 Have you ever wondered what your piano music might sound like on another instrument? How about one of the most popular and portable instruments out there; the guitar! Although the guitar is a much different instrument, playing piano music on it might be easier than you think!

So, can piano music be played on a guitar? Yes. Guitar and piano are similar instruments that both use the treble staff. Piano music also uses the bass clef which can be adapted to strummed chords in the guitar. The biggest adjustment will be transposing the piano sheet music by octaves to make them playable on the guitar.

To help you make the transition from piano to guitar, I put together a list of tips to make the process easier. Read on to learn ways you can easily play the piano music you love on a guitar!

1. Write Out Your Transcriptions

A lot of musicians want to just sit down and start playing their piano sheet music on a guitar and have everything go perfectly well. That’s not always the reality though. Because of voicing, chord structure, and transposing parts, some work must be done ahead of time before the music can be played properly.

So, the first step in playing piano music on the guitar effectively is to write out your transcriptions. Although both instruments read within the same clef, the change in instrumentation means some parts will need to change.

When writing out transcriptions you should consider the following:

The guitar is more limited in it’s ranged compared to the piano. Pianos span 7 octaves while a guitar only has 4 octaves. Because of this, sometimes it can seem impossible to play certain piano repertoire on the guitar, but that’s actually far from the case.

The music can be adapted in your transcription by simply writing the part an octave lower or higher. Music that plays at the outer ranges of the piano will need to be condensed and played in an octave that fits the guitar.

Piano transcriptions for guitar don’t have to be overly complicated. In fact, you can simplify it to just writing out the main melody in the treble staff, and then writing out lead sheet chords underneath. Writing out the chord quality and the inversions are an easy way for a guitarist to read the melody and self accompany just like a piano would.

It’s important that position changes at the guitar are seamless so that the music can flow. If these changes are not easily attainable through playing the music within the original key, then sometimes a key change is necessary. The guitar is based in the key of E while the piano is based in the key of C. It’s very common to see guitar transcriptions written a few keys lower so that the part is easier to play on the instrument.

Sometimes as you’re making adjustments to the range that the guitar plays in, the voicing of the chords will need to change too.

For some piano chords, the voicing won’t make sense on the guitar. Bad voicing can lead to awkward hand positions and clumsy playing. The best way to address the issue is to change the voicing and to even use alternate fingerings for those chords. In the worst-case scenario, a guitarist can leave out notes that are not essential to the overall chord.

Because a guitar only has 6 strings, some of the larger piano chords just won’t be possible to play. In that case, you’ll most definitely want to rework the chord or leave those notes out.

There are some drawbacks to inverting chords though. For one, the chords will sound less affirmative, particularly in areas where there is a cadence or close to a section of music. In those cases, it would be better to figure out a way to play the chord in the root position.

Chord inversions are helpful when looking at piano parts that have huge leaps in them. Doing those large leaps on a piano is not as difficult, especially when you can view the entire instrument more easily. On a guitar doing such a big leap can cause hiccups in the music and lead to playing incorrect chords with awkward fingerings.

So, the solution is to simply invert the chord. Inverting limits the distance needed, and in some cases requires no leaping between frets.

3. Shifting The Rhythm And Melody

A pianist uses two hands to play the instrument. This allows them to self accompany and play the melody at the same time. This is really not the case with a guitar. With a guitar one hand has to form the chord position on the fret while the other hand strums. Because of this, the only way to play certain music is to use a little bit of rhythmic displacement.

This simply means strumming the chord first and then quickly entering with the melody after. If the music has several chords per measure, then it helps to limit how many times the chord is played. This allows for less breaking up of the melody.

If possible, it helps to use voicing to put the melody in the top line, and by doing this less rhythmic displacement is necessary.

4. Perform With A Backing Track Or Duet Partner

Some piano music can be so complicated and involved that it will be hard to do it all alone. Rather than treat this as an obstacle, you can look at it as an opportunity to collaborate.

Sometimes guitar players will join up and play duets with others. Duet partners can cover one part of the music while the other guitarist plays another. This way you can play the melody and have a friend play the accompaniment. This allows for a greater representation of the piano parts and can help avoid complicated transcriptions and transposing.

If you can’t find a partner to play with, then a backing track is also an option. Backing tracks can easily be created using DAW software like Reason or FL Studio. Software like this allows you to build entire parts, record them, and edit them to your liking. If you’re a pianist and already have a MIDI-compatible keyboard, you could actually record in the parts that are difficult to play on the guitar directly into the software.

Another option if you want everything to have a guitar sound you could change it within the software. Guitar looping systems are also quite popular too. Looper pedals allow guitarists to record in short sections of music, and to loop it continuously.

With some creative work, it’s possible to record entire sections of music and enable them on the fly while you perform. This tip is something for someone who wants a serious and clean reproduction of piano music at the guitar.

In general, playing your favorite piano music on guitar is definitely attainable. It requires some workarounds though when the music is more complicated. To help make things less complicated, you should have a plan of action.

Knowing what to do and when is helped greatly by making a transcription of the music. Making notes of the chords you want to play and then the octaves helps a great deal. If the music is really complex and you want to really do it justice, then get a partner or create a backing track!

In order to make the transition from the piano to the guitar easier, it helps to really know your way around both instruments. Playing piano music on a guitar requires quick decision making. It requires knowing which octave you want to play the parts and then making that jump quickly.

With transposing and inverting chords, it helps to practice inversions regularly. This way when an inversion makes sense to do, you’ll be able to shift to them with ease.