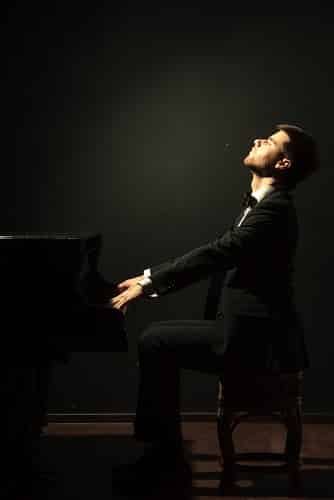 If you’re a pianist, chances are you’ve thought about expanding into other areas beyond solo recital repertoire. The piano concerto allows for that kind of performance opportunity. Piano concertos are unique because they combine large ensembles with the pianist as the featured soloist. f you’re just getting to the intermediate or advanced stage of playing, it’s a good idea to start with an easy piano concerto before exploring the more difficult repertoire.

Here is a complete list of 5 easy piano concertos to play:

5. Grieg Piano Concerto No. 1 In A Minor (First & Second Movements)

Having played several piano concertos myself I understand just how much work is required to perform a piano concerto successfully. This list was chosen carefully for intermediate to advanced piano players. Each concerto was rated based on technical facility required, overall length, and harmonies. Because most piano concertos are lengthy, some of the selections are narrowed down to single movements that can pass as a complete performance.

The first movement is Allegro Molto, and it’s the one you’ll want to focus on learning as it can stand alone. For the most part, the pianist plays the same rhythmic motive throughout the piece that starts with the upbeat. There’s a big trumpet fanfare in the opening measures, and that same fanfare comes again at the end of the movement.

The piece explores several key areas such as C major, A minor, and F major. Ultimately the opening melody returns and the piece concludes in D major. There are some demanding passages, especially when the harmonies are less stable and modulations are occurring.  such as the cadenza that arrives just before the end of the piece. With some dedicated work, the concerto can be played very well.

This piano concerto has a much lighter character than Kabalevsky’s and to a degree might be considered even easier. The first movement starts off with the orchestra playing for a solid 2 minutes before the pianist enters.

There are some arpeggios passages where some stretching between fingers 2 and 4 are required. After leaving G major, the piece briefly travels between B flat major, A minor, and eventually finds itself modulating to G major again. There is a short cadenza that has some octave difficulties the left hand will have to work with.

Outside of this section, the concerto is really achievable, but it helps to have some basic technical strengths such as trills, scales, and arpeggios already mastered. Then it’s just a matter of putting it all together. The movement concludes with the orchestra.

second movement of the Haydn piano concerto No. 11 is a great starter piano concerto. It moves at a slow pace and starts with the orchestra so the pianist can get a good feel for the tonality of the piece.

This piano concerto was originally written for harpsichord, and that shows in it’s overall structure, musical motives, and technical demands. It has a light Baroque character to it, but the constant tempo and scale runs makes this one of the more exciting adagio movements.

When the pianist first enters, they pick up on the same melody line the orchestra had. There are several instances where the pianist and strings double, so it’s hard to ever get lost in this movement. Present in this concerto are some of Haydn’s signature trills, both condensed and written out.

While this movement is written in the dominant key of A major, a good chunk of it explores other key areas such as E major and minor. There is a bit of a solo cadenza that lasts for much of the final 2 minutes of this movement. What makes this section so difficult is the timing of the trills and how they weave between the scalar passages. With the exception of a few ascending runs in the high register of the piano, this movement is quite attainable.

you are seeking out a short piano concerto, then look no further than the Bach Concerto In F minor. Just like Haydn’s concerto, it was also originally written for harpsichord. The BWV 1056 has a nice rhythmic pulse to it, and its’ easy to control the passing.

The same chord areas are explored and then repeated. As the piece moves on some of those harmonies develop more, covering key areas such as A flat major, B flat minor, before eventually repeating the opening material and concluding in F minor.

The second movement is in A flat major, and has a similar melancholy approach that is found in the Haydn D major piano concerto. The strings play pizzicato behind the pianist the melody is further developed.

The final movement is where some of the excitement comes back. While this movement moves pretty consistently, there is quite a bit of demand on the left hand. Both hands have to constantly jump around and work together, basically performing a fugue.

Overall the length of the concerto is quite short with most performances ranging from 9 to 10 minutes.

5. Grieg Piano Concerto No. 1 In A Minor (First & Second Movements)

This piano concerto comes up often as an easy piano concerto. A closer look however reveals that there are some technical challenges pianists will want to look out for before diving into this piece. I recommend exploring the first and second movements, and only attempting the third movement if your playing technique is advanced enough.

This piano concerto starts in A minor and has the memorable outline of the tonal key. It helps to have a large set of hands to play those wide opening chords successfully. In the first movement, the pianist and orchestra trade off parts of the main melody.

To conclude the first movement, the pianist revisits those powerful A minor chords from the opening moving down the keyboard, and then varied moving up the keyboard. While this concerto has several movements, the first movement is written in such a way that it can be considered an entire piece in its own. The movement lasts around 10 minutes which is fine for someone just starting out.

The Adagio movement is gorgeous and starts with the orchestra only for the first couple of minutes. It’s written in D flat major in a basic ABA form. It does dabble with E major in the B section, but eventually returns to D flat major. Technically there is nothing too demanding with this movement, but it does move slowly with a playtime of around 7 minutes.

If you’re up for a serious challenge, the final movement is worth exploring. This movement starts in A minor, but explores several key areas such as F minor, and even A major. This is the most technically demanding of the movements with several flourishing passages and octaves. The same kind of playful character and syncopation from the first movement is also present throughout the third movement. The pianist and orchestra conclude this lengthy movement with 3 powerful chords in A major.

How Long It Takes To Learn A Piano Concerto

Ultimately, when you choose a piano concerto much of the decision should be based on your technical level and musical maturity. For a piano concerto to be considered “easy” depends on a lot of factors. In general, Romantic era piano concertos such as Rachmaninoff No. 2 or Beethoven are going to be on the more difficult side.

Most piano concertos whether easy or difficult are large scale works. They will take time than the average piece to master, and then there’s also the element of collaborating with an orchestra and working on the timing aspect. It can take a while to learn a full piano concerto for those reasons.

It can take anywhere from a few weeks and months, to years to fully master a piano concerto. But again, this all depends on the difficulty of the piece, your musical abilities, and practice habits. The best thing you can do if you feel ready to play a piano concerto is to simply get started. Comes up with a practice plan, break the piece down, analyze it and then move forward. I share some of my own practice tips in this article.