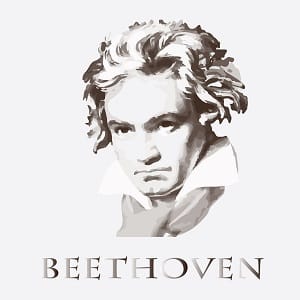 Whenever you think of a piano sonata, the composer Ludwig Van Beethoven immediately comes to mind. He is considered the king of the piano sonatas having developed a wonderful selection of 32 piano sonatas to choose from. While he may not have composed hundreds of piano sonatas like Domenico Scarlatti, Beethoven’s Sonatas are a staple of piano literature.

Because there are so many piano sonatas to choose from, I thought it would be a good idea to compile a list of the best Beethoven sonatas. Each of the sonatas listed here varies in length, difficulty, and appeal.

Ultimately which piano sonata you love the most depends on your musical tastes, but I think you’ll find these sonatas to be perfect for private listening as well as concert engagements if you’re a pianist.

Let’s start off the list with perhaps the most popular piano work in the world, the Moonlight Sonata.

This is probably the most recognizable piano sonata in history. It was completed in 1801. The first movement is especially memorable with it’s haunting C minor melody. For a pianist, it’s one of the easier sonata movements to get started with. The right hand clearly has the melody while the left-hand moves in triplets.

There’s some light syncopation throughout, but it’s not too tough to play. There are some octave demands in both hands, but because the first movement moves slowly it’s pretty simple to approach.

The Allegretto second movement is also quite popular, and it’s written in A flat major. It’s basically a minuet and trio, so it has a nice waltz dance character to it. The trio section moves to D flat major and also has some dynamic contrast to it to make it sound like a separate section. Ultimately, the A material returns, cadencing in the same way it started.

The same rhythmic motives continue throughout the short movement and it can be played in about 2 minutes at a steady tempo.

The most difficult movement int he moonlight sonata is definitely the third movement. There is a constant ostinato in the left hand while the right-hand flurries up and down the keyboard in C sharp minor. It moves at an extremely fast pace, and there is a mix of octaves and scale passages.

Once the basic finger patterns are learned, it’s actually quite easy to understand. This movement is the most demanding in the entire sonata both musically and technically.

Beethoven wrote the Hammerklavier sonata during the late period of his piano sonatas. It’s definitely one of his most important 32 piano sonatas both in its composition techniques, length, and appeal. He wrote this sonata in 1818.

The opening chords of the first movement are in B flat major, and really set the tone for the entire piece. They are fortissimo so it’s an intense way to begin a piece. That first theme is developed and even explores other key areas such as D major and then reaches G major for the second theme.

The development section starts with the second theme,  and then introduces a short fugue which pulls on fragments of the first theme. The movement continues to follow sonata form along with a coda just after the recapitulation.

Around 10 minutes into the sonata, Beethoven introduces the second movement. It’s a short movement that can be played in just 2 – 3 minutes. There’s a playful character to this movement which is written in B flat major, but it also explores B flat minor in the middle section.

There are a lot of similarities in the left hand from the Moonlight sonata that you’ll find here as well as elements from other Beethoven sonatas. It’s written in ternary form, so it’s easy to pick out where the changes are as a performer and listener.

The third movement enters in with a gloomy F sharp minor Adagio tempo. The movement moves painfully slow, but it is simply gorgeous. This is also the movement that requires the most concentration because of its length. It’s almost an entire piece on its own. While the 3rd movement moves slowly it does pick up with some 32nd note passagework in the development section.

Lastly is the fourth movement which starts with a Largo introduction, and then gets moving in the Allegro risoluto section.

The Pathetique Sonata has its iconic Grave intro that moves slowly and dramatically. It’s so unique because it sets up a flurry of ascending thirds and broken octaves moving up and down in the key of C minor. There are many technical features in this sonata you’ll find throughout many of Beethoven’s other works, especially the use of tremolo in both hands.

This is one of Beethoven’s earliest sonatas and also one of the first to feature a slow introduction before the thematic material enters. With the repeats added, this movement takes around 8 – 9 minutes to perform.

The most popular movement from the Pathetique piano sonata is certainly the second. This movement is often heard in movies and television. It’s written in A flat major and moves a steady slow pace. The melody has a beautiful singing tone with a light accompaniment in broken chords.

The pinkie plays a majority of the melody line, so balance and weight distribution in the hands are important here.  There is also a trace to the parallel minor in the development section of this movement before returning to A flat major. As the song progresses the rhythmic pulse changes from groups of 6 sixteenth notes into small eighth note triplet groups.

Overall the Adagio cantabile movement takes around 5 minutes to perform.

The last movement is quite playful but moves at around the same pace as the first movement. It’s decorated with short arpeggios

Another lengthy Beethoven Sonata is the Waldstein. This sonata gets moving quickly in the first movement with the ostinato rhythm. The right-hand takes turns doubling with the left hand here but also plays the melody which jumps between octaves. There is a lot of dynamic contrast with sudden surges depending on what area of the keyboard you are in.

The next movement of the Waldstein sonata is incredibly slow, almost moving at a snail’s pace. It’s written in F major and continues to feature the dotted syncopated rhythm from start to finish. It’s really just an introduction into the third movement which it blends directly into.

The third movement has some cool technical passages in it. It’s built mostly on C major scales and moves between the tonic and dominant often. There is also a lot of hand crossing to help with playing the melodic line. Sometimes that melody line will be featured over long trills.

Things get particularly difficult in the ending section which rushes through at a Prestissimo tempo. There’s a lot of coordination needed to pull this off with even playing while still respecting the dynamics in the score. The ending has octave glissando passages which need to be done at a very soft dynamic level.

This sonata really does have it all and exposes just about every technical and musical element a pianist will ever use in their playing. It feels more like a complete symphonic work rather than a piano sonata.

The Appassionata sonata was published in 1807. It has several popular movements, particularly the first and third movements. Many pianists tend to play the last movement incredibly fast, but much more detail can be heard when it’s taken at it’s true marking in the score.

The Allegro assai movement starts with F minor arpeggios followed by trills. After the roaring descending thirds passage, the piece starts to pick up leading into the A flat major theme. From here on out the piece will continue pulling on the same musical motives and incorporating elements such as tremolos, scale passages, triplet accompaniment, and sudden dynamic shifts.

It’s a vast first movement and lasts around 11 minutes.

In the Andante con moto movement, there is an almost prayer-like atmosphere. There are rich chords played in D flat major. The development section introduces a series of sixteenth-note passages with the melody being played int he left hand.

The theme is essentially embellished here, so voicing and balance is really key to pulling this section off successfully. After that, Beethoven incorporates what is called a double variation. This means the hand’s swap parts with one another, this time with 32nd notes as the focal point.

Much like the Waldstein sonata, the end of the second movement rolls right into the last movement with fermata arpeggios that are rolled.

The third movement is fiery movement, but very similar to the first. It’s based heavily on the Neapolitan chord, something Beethoven used extensively in his music. It almost feels like an etude when playing it, and it features several short cadenzas. The presto section towards the end is the most difficult section, and the piece ends in three big F minor chords.

The Best Recordings Of Beethoven Sonatas

While I consider these Beethoven sonatas to be some of the best for learning at some point, they are also a pleasure to listen to. Not every Beethoven sonata recording is equal though as every pianist has their own interpretations and connection. Generally, though, there are some recordings definitely worth listening to and I’ll list some of those below.

link to Piano Playing And Preventing Carpal Tunnel
If you’re a pianist, then chances are you’ve felt concerned about developing an injury to your hands. Practicing a lot to improve your playing is essential, however, without proper regulation, it can lead to an injury. While there are many ways to put your piano playing in danger, there is perhaps no more concerning injury […]
Continue Reading
link to Playing Piano Music On Guitar - Helpful Tips
Have you ever wondered what your piano music might sound like on another instrument? How about one of the most popular and portable instruments out there; the guitar! Although the guitar is a much different instrument, playing piano music on it might be easier than you think!  So, can piano music be played on a […]
Continue Reading