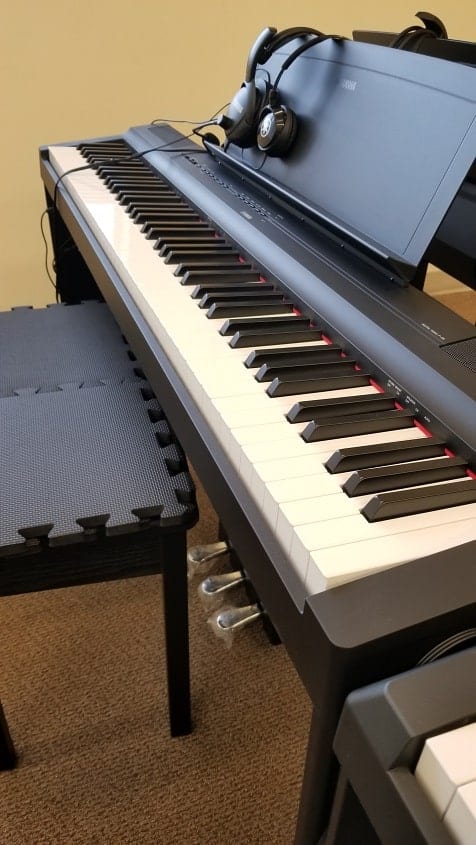 One of the most important piano skills to have is playing scales. Scales are an important technical exercise. It helps develop the pianist’s ear while also helping them form ideal hand position. Knowing how to play scales on piano is absolutely crucial to the development of a well-rounded musician.

Once you’ve gotten a grip on the 5 steps above, you’ll be able to play any scale you want to. In this article, I’ll go through a full breakdown of how these scales are constructed and the best way to approach practicing them.

Why Piano Scales Are Important

Before we get into the steps, it’s important to know why piano scales are important.

Piano scales are the basis for most of the music we play. No matter the genre, each piece of music you play or song that you hear is based off a clear pattern. They impact all of the music you will learn whether it’s Classical, Pop, Rock, Jazz or another genre.

Scales are not just a collection of individual notes. They are a skeleton for harmonic structure, and when the hands play together that’s what the average listener hears.

The piano is designed based on carefully placed intervals. A song is created when all of those patterns come together in a sequence that makes sense to the ears.

Most songs are based on the main key. For example, a Beethoven Sonata in F minor would indicate the overall feel and tone of the piece is in that key.

At first glance, it may not seem like a scale based work, but further analysis will show why it is. As you look through the sonata you’ll find that many partial and full combinations of the F minor scale are implemented.

Sometimes it will start from the root position, and other times it may start on another pitch. There is also the possibility to have multiple scales starting from different positions that form unique chords and harmonies.

Overall when it comes together musically, it will make complete sense.

Scales are important to know because they provide a basis for musical structure. Practicing them regularly will help pianists learn new music faster, but also have a better understanding and interpretation of the music they already know.

Now that you have a better understanding of how scales are used in music, let’s take a look at the easy step by step process to learning them efficiently.

Root positions are not just important for scales. They are also used when pianists play chords, triads, inversions of chords and read chord charts as well. Root positions also help pianists determine the other notes to play in relation to that position.

We typically label the root position with a number 1. The 1 represents something called a scale degree. Because each scale is made up of eight pitches, we have to assign each of those a number so that we know which exact note we are referring to.

A scale is a specific combination of intervals. For each scale type, the patterns have slight differences to them. In order for the scale to be played correctly, it must follow the same spacing of intervals.

Taking a look at the piano keys above you can see that the space between each note is considered to be a half step. An example of this is E to F.

When a black note is in the middle, that actually ends up counting as the second note. Because of that, the distance between C and D would become a whole step because it factors in that third note.

To play a major scale, the piano has to follow the W W H W W W H pattern. Looking at a basic C scale the pianist would end up having to start on the root position, and playing every single white key until they reach the next C.

The whole steps are between C to D, and D to E. The half step occurs when E goes to F. Following that, F to G, G to A, and A to B are the next set of whole steps. Finally, we conclude with the half step which is B to C.

Every major scale will follow that exact pattern, so the concept can be applied over and over again. Where things get tricky is when scales are played from black keys as the starting point. Pianists have to be careful with their eyes to see those patterns.

Take a look at the above example with the E flat major scale. You can see that now starting on E flat which is a black key allows E natural to end up being the second note to create that space. The same logic applies.

Minor scales follow a similar pattern of whole and half steps. The key difference here is that there are multiple variations of the minor scale. This includes natural minor, harmonic minor, and melodic minor.

As you can see from the diagram above, scale degree 3, 6, and 7 are all changed to help reflect a minor pattern. With all minor scales by default scale degree, 3 will be lowered. This allows us to focus primarily on scale degrees 6 and 7 to determine which kind of minor scale we are playing.

3. Poke Out Each Note Of The Scale Pattern

One of the easiest ways to familiarize yourself with the anatomy of a scale is to play it with one finger. I ask my students to use their index finger and poke out each note one at a time. This gives them a chance to visualize the scale and to simplify things without having to worry about finger patterns.

The scale should be poked out once going up and once going down. Do this with each hand until you feel comfortable with what notes you should play. The next step is to then start adding in the correct finger patterns.

4. Implement The Correct Finger Pattern For Each Scale

Take a look at this video of someone playing minor scales following the finger pattern and readjusting the hand placement.

5. Play The Scales In Contrary Motion For Extra Practice

For example in the C scale, both hands would start with the thumbs on C. Playing both hands outward, the pianist would follow the normal pattern of 123, 12345 to go up, and reverse that finger pattern the other way.

When learning scales for the first time, this method of playing scales helps pianists see what each hand is doing. It also helps with coordination when scales are played hands together in multiple octaves.

Other Types Of Scales Pianists Play

Outside of the core major and minor scales, there are a few other variations that more advanced pianists will play. This includes formula patterns, scales in thirds, pentatonic scales, and blues scales.

Below is an example of what a formula pattern scale looks like.

Formula pattern scales are a combination of parallel and contrary motion scales. The goal of practicing this scale pattern is to help develop fluidity in a pianists technique.

As a pianist plays real repertoire, they’ll be met with scalar patterns starting in one position and naturally evolving into another going in a different direction.

A large amount of piano repertoire features scales in thirds. The best way to get practice for those passages is to practice scales like this regularly.

Scales in thirds provides a base for creating more complex chords.

Pentascales contain the basic structural components of a complete scale. They only contain five notes. The heptatonic scale has 7 different pitches. They are perfect for comparing the relative major and minor patterns on a basic level before adding in the leading tones.

The most important detail is that it can be constructed from the major or minor scale. As you practice for full-scale patterns, pentatonic scales help with understanding where to put the thumb under or finger over.

Outside of classical repertoire, jazz piano is a very popular style. To be really proficient at jazz piano playing, it helps to know the blues scale.

The blues scale is a combination of a minor pentatonic scale with an additional scale degree 5 that is lowered. Pianists typically play blues scales on top of major chords which adds to the unique sound of them. While it’s a six-note scale, it contains 5 notes from those combinations of scales.

Playing scales is a crucial part of piano playing, however, they may not be the most exciting technical skill to practice. Especially if you’re a young pianist or teacher trying to train students, scales alone can be boring.

Some ways to make scales more exciting to play is to create a game out of it. See how many times you can play a scale correctly and score yourself as you play. Color coding scales and testing your memory between the relative major and minor patterns is also another way to test your scale knowledge.

It’s important to play scales as evenly as possible, so I always recommend pianists start with a metronome slowly and gradually speed up from there. Ideally, scales should work their way up to 144 BPM. Challenge yourself every day and see how quickly you can rise up the ranks and achieve fluid scales that are fast, accurate, and more exciting to perform.

How many piano scales are there? There are 12 major scales and 12 minor scales. Within the minor scales, there are 3 forms which lead to a total of 36 scales. Formula patterns, blues scales, scales in octaves and various intervals and other rules adds more to the overall scale count.