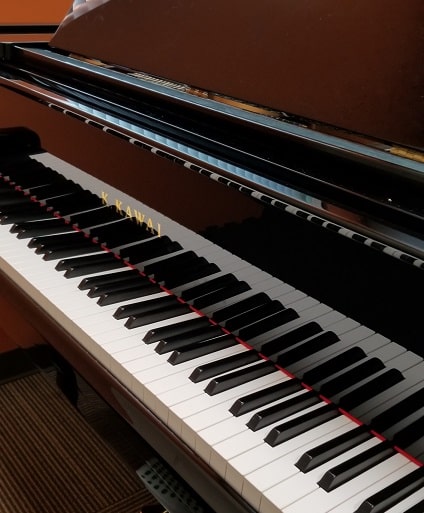 How Heavy Is A Piano In KG

While most pianos are measured in terms of pounds, it’s important to know the average weight of a piano in kg, especially if you’re using moving equipment that measures differently. A baby grand piano weighs about 282kg. Pianos between 5’2″ – 5’9″ long weigh 330 – 395 kg. Concert grand pianos 9′ and above average around 480 kg.

While these numbers are accurate averages for the weight of common piano types, a lot of it depends on the specific instrument model. For example, a 5’1″ Yamaha baby grand piano will not weigh the same as a Kawai GL-10.

Although both pianos are the same size, they are built differently. The type of wood being used, the metal materials, hammers, strings, and other innovative parts have a great deal of effect on the weight. The finish of the wood casing also plays a role.

Thankfully, most piano manufacturers list the specs of their instruments on their websites and in brochures. The weight of all the parts in both pounds and kg is listed there as well as the number of total parts.

Every piano is different, but there are some universal acceptions when it comes to weight contribution. Below is a complete list of the heaviest parts of a piano and an explanation of why it contributes so much weight.

The body of the piano is built from many layers of wood. That wood is specifically selected in the factory, sorted, and then glued together to make one complete frame. While those layers of wood are thin initially, together they do end up weighing quite a bit.

The thickness of the casing has a great deal of impact on the sound the piano makes. Usually, the thicker the case, the more dark and whole the tone of the piano will be. The wood case is a key component of balancing the overall acoustics of the instrument.

For upright pianos the casing is vertical, so the taller the piano the bigger the sound will be. That also means much more wood which contributes more weight. The upright piano is unique though as some parts of the wood casing are actually removable.

This includes the lid, and also the piece that covers the pedal mechanism. Removing those parts can reduce the overall weight making the piano easier to move.

The cast iron plate is one of the heavier parts inside a piano, specifically the grand piano. It’s responsible for holding all of the tension that the strings create. Cast-iron plates north of 60,000 lbs in tension! Because of its ability to hold more tension, grand pianos can produce a much bigger sound.

The numbers can fluctuate depending on whether you’re accounting for the pin block, tuning pins, and agraffes in your calculations.

For an 88 key piano, there are approximately 236 strings. Each of those strings carries several hundred pounds in tension, although that doesn’t entirely contribute to the weight of the entire instrument.

Piano hammers are made up of a combination of wool and other fibers. On their own, they don’t weigh much, but as a whole unit it adds up. Each hammer is connected to the piano keys by a wooden lever.

While the casing of the piano is quite heavy on its own, so are the legs themselves. Piano legs come in all shapes, sizes, and thickness levels. Some legs also have metal wheels which are also heavy so that they can support the weight of the entire instrument.

It’s customary to remove the legs whenever moving a piano. This not only helps with getting the instrument through a narrow space but also with reducing the overall weight. Older pianos pre-1950s tend to have more dense piano legs.

If you’ve ever lifted a piano lid before, then chances are you know just how heavy this part can be. The lid of a piano is made up of a solid combination of wood. It’s connected to the piano casing via metal hinges.

One reason the lid is so heavy is that it’s designed to protect the inside parts of the piano from damage. The lid is also built to reflect the soundwaves from the soundboard which aids greatly in sound projection.

The lid has two parts, with the front part that folds back and forth. Some lids weigh as little as 20 lbs, while others weigh 45 lbs and higher! Much of that depends on the size of the piano (concert grand vs upright) and how it was manufactured.

If you plan to move a piano with a heavy lid, it’s a good idea to leave the lid on the hinges as it’s a difficult procedure to put them back on.

Underneath the cast-iron plate is the most delicate part of the piano, the soundboard. Most soundboards are made from textured layers of spruce wood. The soundboard spans the entire length of the piano, however, it is not very thick. While the soundboard does not add significant weight to a piano, it’s still something to consider.

There are 88 total keys on a full-size piano. As a whole, those keys add a nice bit of weight to the piano. Most piano keys are made from a combination of solid wood and plastic covering. Vintage pianos use ivory keys which weigh a bit more than today’s plastic keys.

Can You Move A Piano Yourself

The most common reason for needing to know the weight of a piano has to do with moving one. And yes, it’s entirely possible to move one yourself as long as you have the right tools and hands on deck.

Most professional movers use teams of 2 or 4 people when it comes to moving the instrument. You can expect an upright piano to take at least 2 people to move while a concert grand 6′ and higher might take up to 4 movers.

If you plan to move a piano yourself then plan on having a few tools and extra helpers involved. You’ll need to have some tools to remove the legs on the piano as well as someone to lift the instrument up on the back end.

It’s important to wrap the piano in plastic and with protective blankets so that it does not get scratched. Because pianos weigh several hundred pounds, it’s not wise to pick one up at any point.

Instead, you should use a rolling piano dolly that you can easily slide the instrument onto. Check out this article for more details on how to move a heavy piano.

Does Moving A Piano Put It Out Of Tune

After moving a piano, chances are you will need to tune it. Whether it’s a heavy upright or a lightweight grand, pianos will need to undergo a brief acclimation period. Usually, it takes a few weeks for a piano to settle before it can be tuned.

Determining The Weight Of Your Piano

If you already own a piano then determining the weight is easy. The manufacturers list the weights in brochures and on their websites. This information is quite valuable, especially when you’re looking to hire a piano mover.

Start off by searching online for the piano model number and year and you’ll find all the information you need.