As an Amazon Associate I earn from qualifying purchases.

Musical scales are an important component of music. Whether it’s piano music, orchestral music, or modern music, the musical scale lays the foundation for those pieces. There are many types of scales from minor to major, and understanding how they all work is important.

To really understand a musical scale is to understand the entire structure. In this article, I’ll dive into each of the different forms of musical scales. We’ll take a look at how each scale is built, as well as the significance of each.

Interested in quality digital pianos for easy learning? You can find them by clicking here#ad

To better help you understand how the different scales are constructed I’ve included some help musical scale charts. The charts include suggested fingerings if you’re a pianist.

This first chart includes many of the white key major scales. This begins with C major which is the most common of the scales. 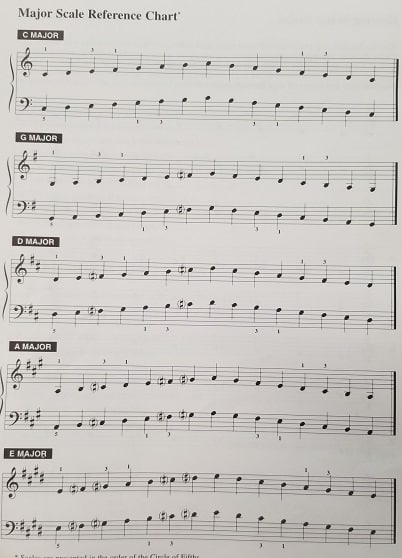 This next chart includes some of the popular major scales that begin with flats. 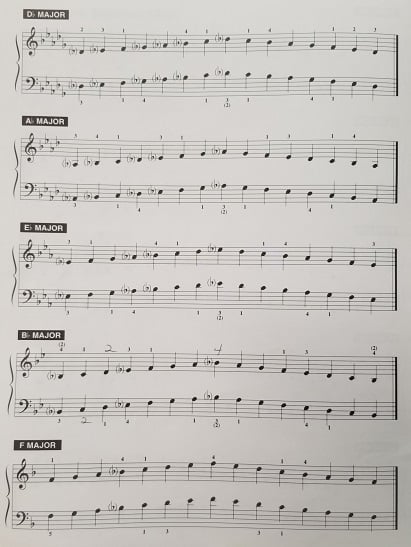 The most widely used musical scales are the 12 major scales. Major scales are most easily defined as a diatonic scale with seven different notes. Each of those notes is organized in a specific order to help fulfill the pattern and achieve the desired sound of a major scale.

The tonic is always the starting pitch and in most cases the starting key of a musical composition. After that follows the subdominant, mediant, and subdominant which help set up other harmonies within the music.

The dominant and median are the tones that help form a complete triad. Each scale has a leading tone whose main role is to set up the tonic if the scale were to continue.

To better understand the distance of all the scale degrees, you need to know how whole tones and semitones work. In the case of the major scale, it’s made up of patterns of whole and half steps.

Of all the musical scales the easiest one to recognize is the C major scale. This is because the C major scale features no sharps or flats. For a pianist, it’s one of the first scales ever taught because of its simplicity.

For a scale to be in the natural minor,  scale degrees 3, 6, and 7 will all be played at a semitone lower than they would be in the major scale. This gives the scale a distinct tone, and also a lack of a true leading tone.

This also leaves us with an entire collection of whole steps. There are no half steps in natural minor scales.

What’s interesting about the natural minor scales is that they share the same exact key signature as the major scale. For example, A minor has zero sharps or flats in the key signature, so that means C major would be considered it’s relative major scale.

Harmonic minor is best to understand when comparing it to the natural minor scale. In a harmonic scale, the lowered 3rd and lowered 6th scale degrees remain.

What changes however is the 7th scale degree. It is raised up a semitone, which now turns it into a true leading tone. For example, in a G harmonic minor scale, the notes would be G A B-flat C D E F-sharp. Take a look at the example below.

When playing this on the piano, for example, you’ll hear a clear lead into the tonic, unlike the natural minor.

We tend to hear a lot of harmonic scales in Middle Eastern, Indian, and Central Asian music.

In Classical music, the scale is widely used in minor pieces, especially Baroque compositions. It’s used much more than the natural minor scale because of its strong tonality.

Melodic minor scales are my favorite of the bunch, mostly because they feature a combination of two different minor scales. Here’s how this works.

The ascending version of the scale features a lowered 3rd, raised 6th, and raised 7th. This gives the scale somewhat of an awkward sound, but you can still hear a clear leading tone to tonic.

When the scale descends in the other direction, the natural minor version of the scale is actually played. It’s a unique combination, and one often employed in really complex Romantic era pieces.

How Scales Are Used In Music

Major and minor scales are used widely in all types of music, especially Classical and Western music.

From Chopin to Beethoven, scale passages are used with great effectiveness. Especially in some of Chopin’s etude sets and Beethoven’s sonatas, those scales serve as the melodic basis of an entire work.

Scales don’t work on their own though, as they need to be harmonized in order to work effectively. The role of the scale is important because it helps determine what sort of chords will be played throughout the piece.

For example, pieces that operate within the melodic and harmonic minor scale tend to have dominant seventh chords. Chords can be built form any of the scales to help support the melody.

With the melodic minor scale, in particular, many of the triad qualities are either minor, augmented or diminished. In the case of IV and V chords, the chord qualities will be major. The vi and vii chords will have a diminished chord quality.

Scales can also be used to help modulate pieces. It’s not uncommon to have a piece start in a major key, and then modulate to the relative minor through the use of clever scale transitions.

This could mean testing the various modes of natural, harmonic, and melodic minor to reach a specific point. Broken and partial scales are also used quite effectively in pieces to serve as transitions or cadential material.

Other Types Of Scales

Outside of the complete seven note scales, there are also scales that use fewer notes. This includes pentatonic scales, Middle Age scale modes, and chromatic scales.

Pentatonic scales are based on five notes. They can still hold major or minor qualities just like any other type of scale.

In the Middle Ages, there were seven different modes of scales used. Unlike today’s scales, the starting tone was always referred to as the final. The scale modes in the Middle Ages included:

Locrian, on the other hand, would be The natural minor with a lowered fifth. And then there is the Ionian mode which is the major scale without any adjustments needed. What’s unique about the modes is that they can start on any pitch, as long as they follow the necessary pattern of whole and half steps for that mode.